As much as I’d like to embrace the season and lean into my “spring awakening,” it doesn’t come naturally. I like blooming flowers and burbling songbirds as much as the next guy, but I can’t help thinking about the violence and trauma that comes with real transformation: the new is often only possible at the expense of the old. The buds on the trees are encouraging, but because they fill in the starkly bare branches left vacant by the demise of their leafy ancestors. The chirp of new chicks is sweet, but belies the extreme trauma of hatching from an egg. So, yes, I like spring, but I guess it feels inappropriate to focus on the bright without considering the dark.

Which is probably why my preferred brand of springtime acknowledgement aligns so neatly with that of Disney’s 1940 Fantasia. Specifically, “The Rite of Spring” segment, which pairs Stravinsky’s challenging score with an animated highlight reel of prehistoric life on earth. The music has a strange sound – like early traditional songs mashed with the blares and bells of (early 20th c.) modern technology – but is married with sequences about the earliest life on earth, and all the roiling violence that it wrought. Sure, I mean the T-Rex, but also the gushing lava and jutting tectonics and boiling seas that uniquely combined into a primordial soup capable of supporting organic life.

The premiere of Stravinsky’s “Rite” is itself an infamous example of the combustion that can come with making space for the new. When the piece was originally performed as a ballet in 1913 the audience was so crazed by the newness of the sound that they rioted in the theatre. Literally. “Rite” had a violent, uncooperative sound but ushered in a new age in music; Leonard Bernstein later dubbed it “The most important piece of music of the 20th century.”

Likewise, Disney’s treatment of “The Rite of Spring” highlighted the indiscriminate destruction that facilitates real transformation. The evolution of the creatures on screen is mesmerizing and enchanting, but their progress is only possible through violence and destruction. And, spoiler alert: the dinosaurs all die.

I think I return to Fantasia’s dinosaurs time and again because the segment captures the awesome march from the cosmos to the cretaceous, without glossing over evolution’s inherent destruction. And the bombastic dissonance of Stravinsky’s “Rite” remains my springtime soundtrack. I usually hum along (even though it’s difficult) because I am moved with gratitude that at least I didn’t have to claw my way out of an egg to sing my song.

(Here’s a video of an historic recreation of the “Rite” premiere, performed on its centennial in 2013. Yes, it’s in French, and yes, it’s 42 minutes long but, BOY HOWDY – worth it, pals.) 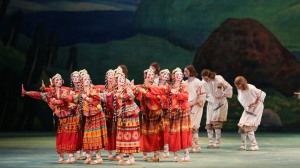